We want to structure things so that both EVE management traffic and the app instances can access VLANs, LAGs, and VLANs over LAGs. The VLANs and LAGs part of the picture are new, but the other parts are existing. (We might have confusion and bugs due to the common practise of the name of the system adapter, logical label, phylabel, and Linux ifname being identical in most deployments and models.)

Today, when management and application traffic share the same physical port (eth/wwan/wlan), they both share the same network and cannot be isolated for preferential/special treatment. Use of vlans solves these problems by attaching the EVE vlan interfaces to separate networks, which helps in isolating the management traffic from application traffic. This allows the external networks to give preferential treatments as per their requirements. EVE can extend the isolation by for example configuring ACL rules that block traffic coming on management specific vlan interfaces to not get forwarded and vice versa. EVE can also implement special traffic metering logic on management interfaces to police certain types of traffic more than others without affecting the application traffic. 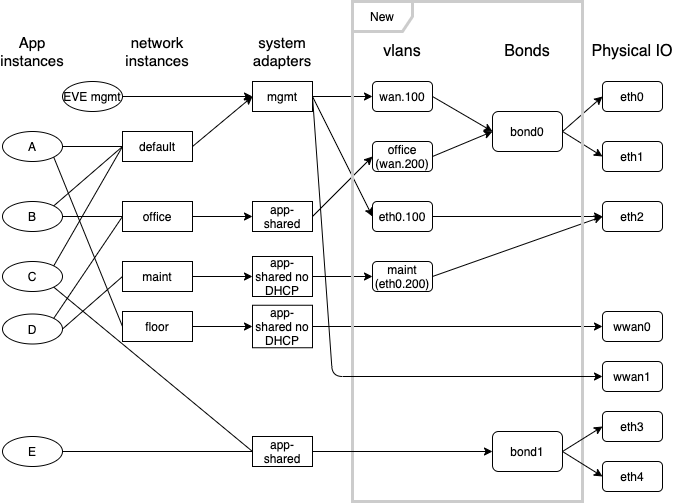 Today’s object model has two layers, and we will discuss a new intermediate layer below:

The current relationship between the system adapter and physical I/O is based on the names which are used (and not things like UUIDs). Due to our gradual introduction of the PhysicalIO layer  the implementations might look at several “name” and “label” fields but fundamentally we have:

As we introduce the L2 layer object we want it to be sufficiently general that we can have a SystemAdapter refer to a VLAN which refers to a LAG which refers to two or more PhysicalIO. We also want to support the old model where system adapters refer directly to PhysicalIO adapters. This recursion implies that the names need to be unique across vlans, bonds and PhysicalIO logical labels. The picture below shows how system adapters relate to PhysicalIO adapters currently.

The current implementation of the reference relations between system adapters and physical IO is confusing. EVE code does not have a uniform way of looking up for referenced objects. It is sometimes the Name field that is used to lookup lower layer adapters and some other times it is the lowerLayerName field that gets used to lookup lower layer adapters. We should streamline the way we maintain references between different layers of adapters. Controllers should always have the upper layers reference lower layers making the lowerLayerName field of upper layers reference to the logicalLabel field of lower layers.

When we specify a Network Instance we have a port field (which can be a group like “uplink” which means a management port, or a specific interface). That reference can now be to a logical label of a PhysicalIO or to the name/label of a L2 object (vlans/bonds).

The Vlan and bond adapters specified as part of the device model file are fixed and cannot be deleted from UI. Changes can be made to adapter configuration from UI such as the cost, network attachments, usage type, etc.

Example realization in the EVE API

VlanAdapter and BondAdapter messages together comprise the System Adapter L2 layer sandwiched between the SystemAdapter layer and the PhysicalIO layer.

Edge node configuration (config.EdgeDevConfig) will have two additional lists (vlans, bonds) in addition to the existing SystemAdapterList and DeviceIoList. The cloud controller shall have an indication flag in config.PhysicalIO that tells edges nodes and user agents that a particular physical IO adapter is either a parent of vlan adapters or is part of another bond adapter.

A new proto enum type LogicalLinkType is defined above. It shall be used to indicate if a particular adapter is made a parent of other vlan adapters or has been made part of a bond interface.

The pictures below show examples for vlan adapter and bond adapter lists that will be part of EdgeDevConfig. 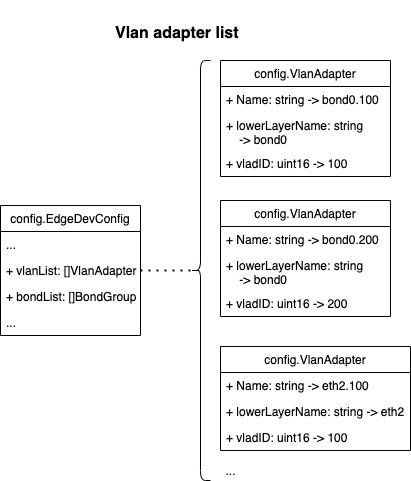 Each vlan adapter object contains a user given name (from device model file), its vlan id, and the parent physical adapter of this vlan adapter. Vlan adapters can have both physical adapter and bond interface types as parent adapter. It might make sense for EVE code to collapse the vlan related fields into the existing NetworkPortConfig (add the new vlan id field) object that is part of the DevicePortConfig object. Bond interfaces may need to be sent as a separate list inside DevicePortConfig. Also NetworkPortConfig will have a new indicator field that indicates if the current network port is a vlan interface or bond interface or a regular interface. 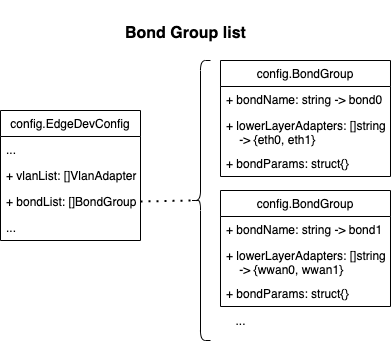 NIM service should take care of not creating the kethx interfaces for physical IO adapters that are underlying adapters for other Vland or bond adapters. NIM should also have the additional logic of creating any non-existing vlan interfaces or bond interfaces in linux kernel when the edge node decides to change its DevicePortConfig. There should also be additional logic to remove any pre-created vlan/bond interfaces that are no longer part of the new DevicePortConfig that is being applied. Even though the vlan and bond interfaces being part of the device model cannot be added/deleted from user agents (UI/zcli), the edge node may in the event of prolonged network disconnection try to replace the running network configuration with last resort configuration. During such an event, NIM service should take care of creating new vlans/bonds that are required and remove any stale vlans/bonds that are not required according to the DevicePortConfig file being applied. 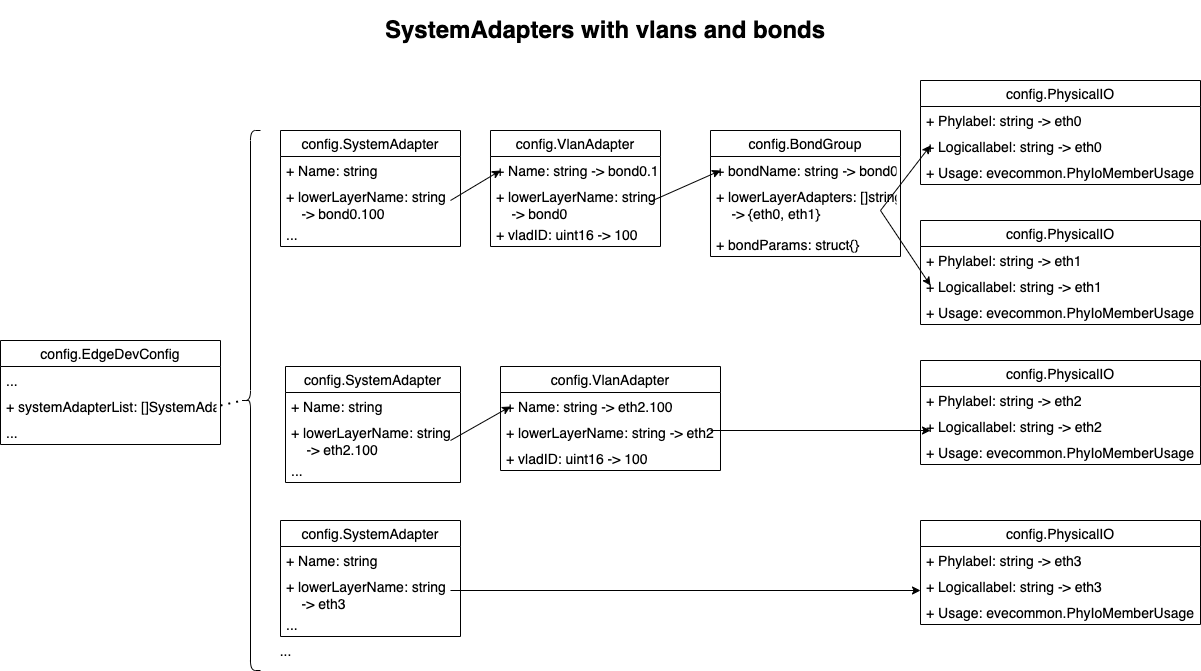