EVE system has been built with security at the core of its design. One of its SECURITY principles is that, EVE should be trustworthy, and it should provide a deterministic way to measure its software layers, right from firmware, all through bootloader, kernel and user-space applications.  It should also provide a mechanism to report these measurements to a third-party for attestation. This is to provide a verifiable software environment to launch user applications, i.e. the Edge Container Objects. The concept of measured boot is not new. For example, mobile phones use measured boot and attest to a verifier, before initiating a payment transaction. Blockchain smart oracles at the cyber-physical edge, have to prove their software stack as trustworthy, before injecting events into smart contracts. This is a common requirement for distributed systems in general, but it becomes even more important for geographically remote systems like IoT Edge gateways, as there is no physical perimeter security for these Edge gateways. Following section describes the unique operational requirements of Edge gateways, and the attack possibilities associated with them:

These challenging environmental conditions and deployment requirements bring in their own set of security attack possibilities:

That is the problem to solve - EVE should maintain operational availability in these diverse conditions, and at the same, EVE should also support a security framework to detect and mitigate these security challenges. i.e.

That is what this proposal is about: Measuring the boot chain of EVE, and allowing access to select resources in the Controller only  on the basis of attestation of these measurements. Since any software can be potentially modified, such measurement architectures typically use a hardware based root of trust (HRoT) or a Trusted Execution Environment(TEE). Here we present a solution based on Trusted Platform Module as the Hardware Root of Trust.

At a high level, the solution is to

Following sections describe the details, starting with a review of existing solutions in this space.

Measured Boot, is another security standard, where the measurements are recorded into TPM PCRs but the boot process can be allowed to complete. The measurements can be later read back from TPM and the Audit log of all the measurements can also be fetched.  Thus measured boot does not make any judgement about the integrity of the boot stages, but gives opportunity for an external verifier to inspect the TPM Audit Log and PCR values in a detailed manner to see which components were measured, what their measurements are etc., and make a decision.

As you can see, both the standards have their own merits and demerits when considering security requirements for a remotely managed EVE system. i.e.

Therefore, one needs to look at how we can meet these two seemingly conflicting goals.  In the following sections, we present a solution mostly based on the principles of measured boot, but also considering the offline operational requirement of EVE. In the end, we also present a hybrid model, where we can add some features from Secure Boot, to provide more security against firmware Rootkits.

In the following sections, we first present the key capabilities of TPM, and then describe how these capabilities can be used in EVE system to arrive at the solution.

TPM can be asked to perform a “PCR Extend” command,  where a particular hash value would be added to the existing hash value in a Platform Configuration Register(PCR), and the resultant hash value can be stored back in the same PCR. i.e.

One can only extend the current value in the PCR with a new hash value, and the existing contents can not be overwritten. This provides us these key capabilities:

TPM can seal a given secret information against the current PCR values, through a TPM command called “Seal”.  Once sealed, the information can be read back only through an unseal command, which will succeed only if those PCRs hold the same set of values as they were during the sealing operation. In other words, if those PCR values aren’t the same, the secret can not be recovered.

Using these two TPM capabilities, one can build powerful solutions to measure and validate the software state of a given system. The measuring process is called Measured Boot, and the method of getting the measurements verified and attested through a third-party is called Remote Attestation

Measured Boot is a method where each of the software layers in the booting sequence of the the device , measures the layer above that, and extends the value in a designated PCR. e.g. BIOS measures various components of Bootloader and stores these values in PCRs 0-7. Likewise, bootloaders can measure the Linux kernel and store the measurements in PCRs 8-15. The Linux kernel has a feature called Integrity Measurement Architecture (IMA), where various kernel executables/drivers can be measured and stored in PCR 10.

During these extend operations, the extend operations are recorded by BIOS and Bootloader, in a special firmware table, called the TPM Eventlog table, and this table is handed over to the operating system during OS takeover. By playing the same sequence of extend operations recorded in a given TPM Event Log, one can check if the final PCR values match, and if so, then the Event Log(and hence the software layers) can be trusted.

Based on the above constructs, we present a solution to measure and attest software integrity of the device . Just for recap, EVE is the open-source software from LF-Edge for Edge Virtualization, running on IoT Edge gateways. EVC is the controller for managing these EVE instances.  Adam under LF-Edge is an open source implementation of one such EVC. The APIs between EVE and EVC are specified in EVE API specification.  In the context of remote attestation, the EVC is the attesting authority and EVE reports its measurements for attestation.

Fig 1. Role of EVC as the verifier, and EVE as the attester

If EVE or BIOS image was changed during boot, then unsealing of this storage will fail, since the PCRs have changed. Since ECO Volumes are inside the sealed storage, ECO volumes are locked till re-attestation happens with the EVC.

To implement this, ECO volumes would be inside the encrypted folder (/persist/vault), with the Volume Storage Key sealed inside TPM.

To provide some flexibility to the device administrator, when deploying ECOs on the EVE platform, there will be 3  security modes for app deployment:

With the approach to seal the key(s) needed for fscrypt under the TPM, this means that if the PCR values have not changed (e.g., a normal reboot, or a reboot due to a power outage) the device will be able to unseal those keys and start the ECOs without any controller connectivity.

After a BIOS and/or EVE update, the PCR values will presumably change so the unsealing will fail. In that case the device needs to perform remote attestation with the controller (with automatic and/or user acceptance of the new measurements) before it can retrieve the key from the controller. Note that as part of EVE update we already require this connectivity to verify that the update is fully working. Once retrieved the device will again seal that key under the current PCR values.

The offline approach means that if there is something else wrong, such as IP geolocation doesn’t match, the applications are likely to start before the controller can raise a flag and potentially disable the applications.

And since this is measured boot it means that if some firmware or EVE component has been compromised, EVE will still boot and attempt remote attestation. Such a compromised device might be running some root-kit which can access the adapters on the device , but applications will not start. Thus this implicitly assumes that the security of connected systems is based on credentials stored in the application instances and not merely by having the physical connectivity to some serial port or Ethernet network. 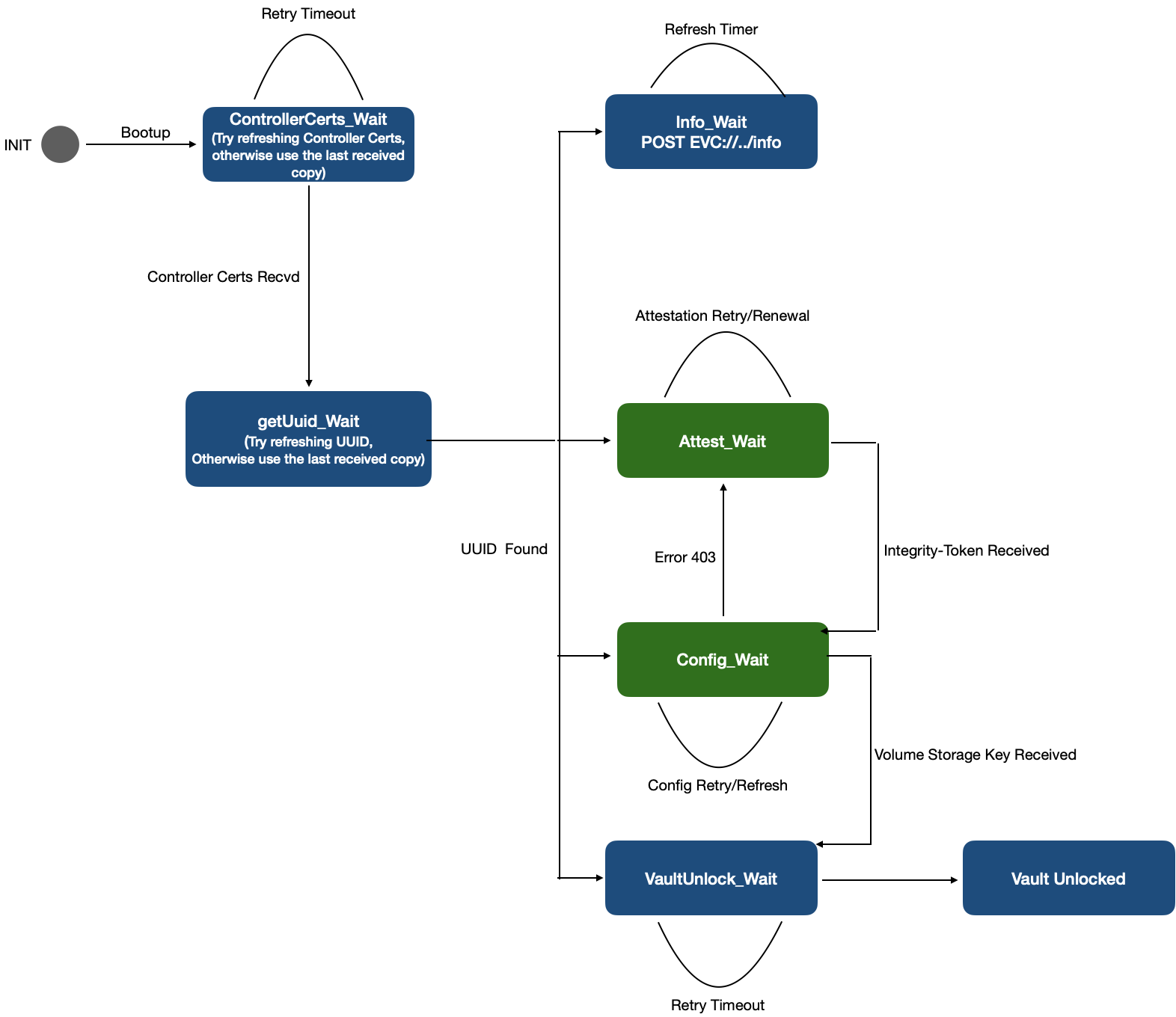 The next section presents the same steps, but at more functional level, with interaction among various EVE microservices. 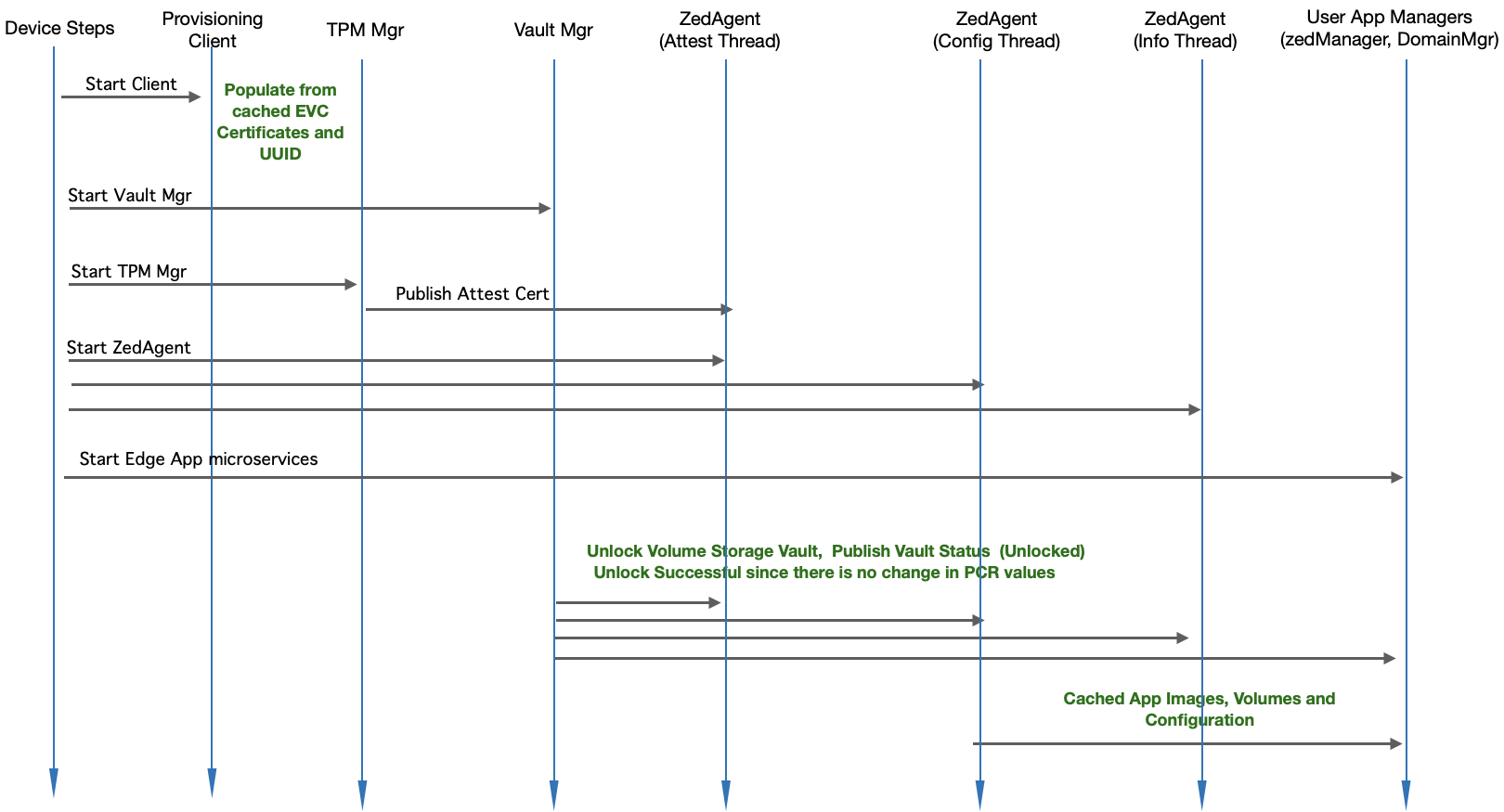 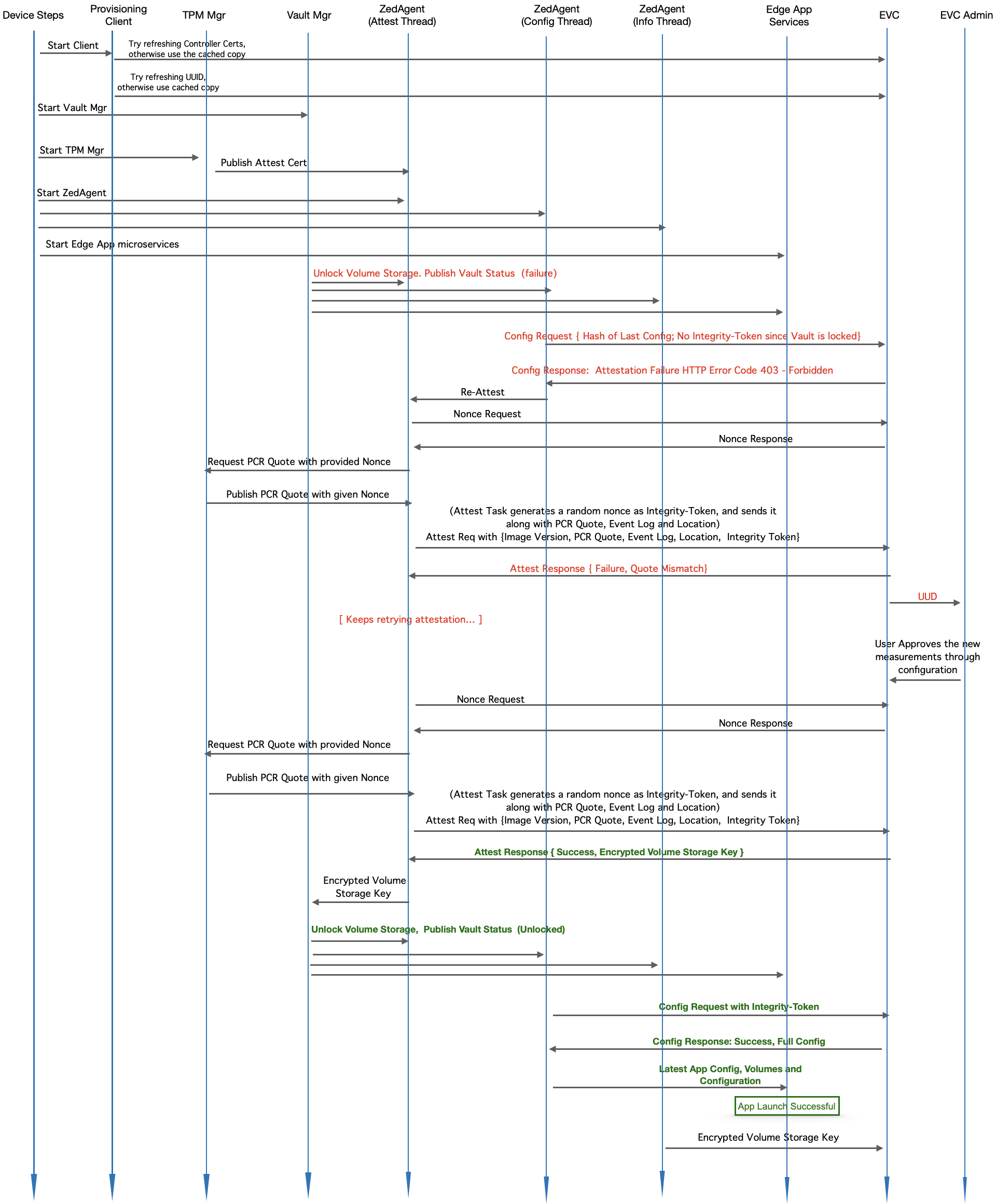 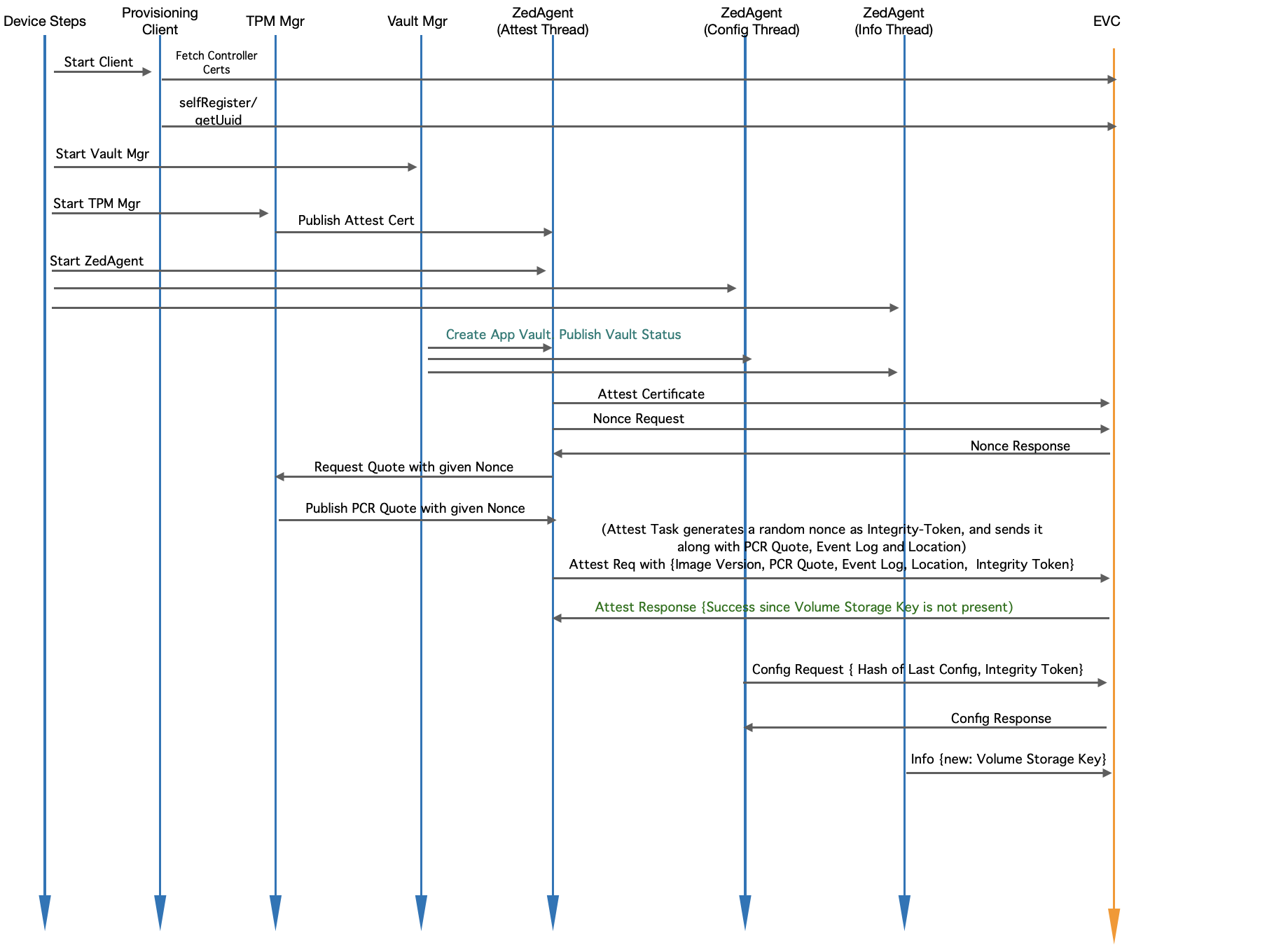 During regular reboot cycles of EVE (without any software change), the PCR values are not expected to change, and hence with a simple check of PCR quote (with a nonce to prove freshness), EVC can make a quick check and approval on the state of software post-reboot. However, it is during software change that there are additional steps involved.  To understand it better, consider following two cases:

A Legal Upgrade scenario: Due to a software upgrade triggered, EVE reboots with new software, and presents a PCR quote different from its last-reported value

An Attack scenario: A rogue software is installed, and EVE reboots with the rogue software, and pretends to be one of the supported versions of EVE, and presents a PCR quote different from its last-reported value

As you can see, in both the cases EVE presents a different PCR quote than the last-reported value. One case is genuine and should be allowed but in the other case, it is a rogue software and should be detected and reported!

Since EVE must present PCR quotes in both the cases (otherwise config request will fail with Error 403), EVC can examine PCR quote to see if it matches with PCR quote of the EVE version it thinks EVE should be running presently.  In other words, for EVC to differentiate between approved vs unapproved image version,  one must mark the supported EVE image versions as "approved" by entering their  corresponding measurements values expected in the TCG measurement sequence (since multiple values can be extended to a single PCR).  With the help of this "list of approved measurements" , EVC can co-relate the entries in TPM EventLog to confirm if the boot chain with the modified software image is trusted and expected.  It is possible that a rogue software might, after reboot, not send any config request at all, and still trying to access the contents on the disk, like credentials, sensor feed data, etc from the Edge Container Volumes.  But the decryption key for accessing these encrypted volumes (the Volume Storage Key), is not stored anywhere in memory or on disk, but rather it is sealed with the PCR values of the previous software version. The only other way to get access to this key is from EVC, but EVC will share this key only on successful attestation.  Through such a backup of encryped material, the EVC ensures that only approved EVE images can access the protected resources like Edge Container Volumes. Since PCR quote is always generated with a nonce given by EVC from time to time, this provides freshness proof for the quote, and a rogue software can not copy PCR quote from a supported EVE version and pretend that it is the latest quote.

Putting it all together, integrity of the upgrade is established through the following steps (Fig 6): 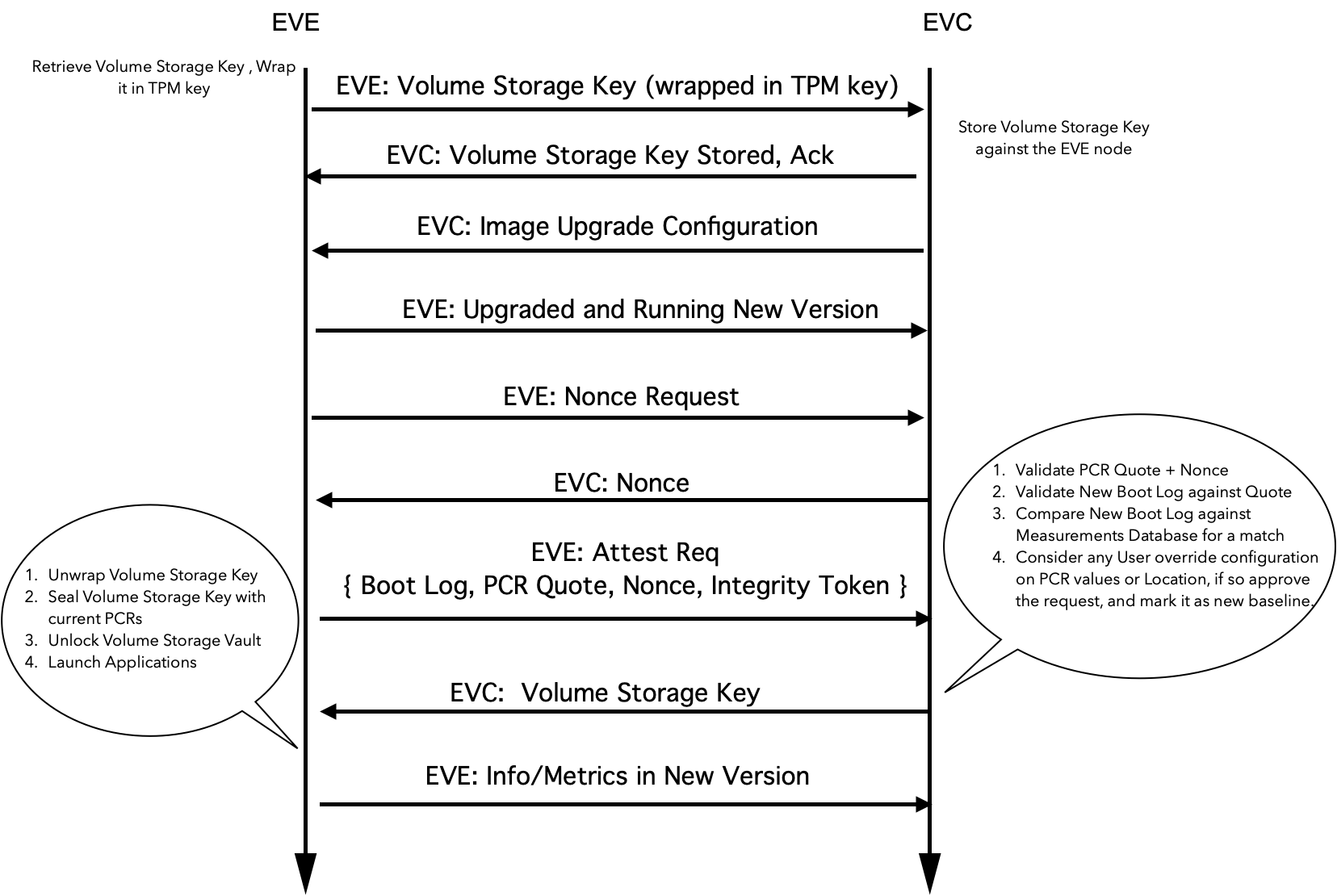 Fig 6.  Overview of flow of events during Secure Software Update

While the workflow is almost the same for securely upgrading firmware on EVE, the following additional steps are required:

Since there can be many implementations for EVC, to maintain compatibility, following API definitions are proposed for the purpose of implementing this feature: